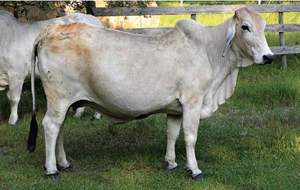 Barthle Brothers, a long-time Brahman cattle operation in Central Florida, owns two of the twelve Vanguard females: $BB Ms Manso 87 and $BB Empress Berch 286. “It is an honor knowing we have two of the twelve cows that have qualified for this award,” says Larry Barthle, an American Brahman Breeders Associaiton (ABBA) member from Florida.

“Florida breeders don’t brag about their award-winning females,” Barthle adds, “but at Barthle Brothers, the Brahman cattle have to pay their way to stay around the ranch. “Our family makes its living from our cow/calf herd which contains approximately 1,000 mama cows,” Barthle says. “We have a three-breed rotational program with Brahman as the hub. We also breed between 50 to 75 registered Brahman females each year.” Barthle attributes their success in the Vanguard program to their continued commitment to the U.S. beef industry, and the role that Brahmans play.

“These two cows are good examples of what we have been doing over the long haul,” he explains, “Balanced traits are important to the U.S. beef industry. We as a breed need to develop Brahman cattle that are structurally correct, deep bodied, easy fleshing, thick and meaty. Add in the reproductive efficiency and moderate size of the Brahman breed, and you’ve got a great Brahman cow.”

$BB Ms Manso 87 was the first Brahman cow to be awarded this status in the entire state of Florida. Born in 1984, she was bred by the Barthle Brothers and owned by Ben Barthle. This cow’s sire, TA Sugar Manso 993, was a bull that Barthle picked as his first choice, out of 90 other yearling bulls from fellow Florida Brahman breeder, Andy Tucker. She produced a Maternal Merit female, =BB Empress Carrie 165. 87/4 was a dark pigmented, moderate frame size five female who weighed approximately 1,100 pounds at maturity.

Barthle recalls her as being very long and deep-bodied. Most of her calves were shown by Barthle’s nephew, Nick Dillard. Dillard’s successful showing career throughout Florida helped secure 87/4’s place on the American Brahman Breeders Association Register of Renown.

Like any great Brahman female, 87/4 will be remembered by the Barthle’s for producing three Brahman herd sires. Two of these sons were used at the U.S.D.A. STARS research station in Brooksville, Florida. One of her sons was used to represent the Brahman breed in the National Cattleman’s Beef Association’s breed carcass evaluation test. The data on both of these Brahman bulls indicated high quality carcasses with large rib eyes.

The second of the Barthle’s Vanguard Brahman females, was born in 1995 and is owned by Kayla Barthle. 286/4 is a red-tinted, frame six female who weighs approximately 1,250 pounds. Barthle reports that 286 has never missed a year calving, which is one factor that helped her achieve the American Brahman Breeders Association Maternal Merit designation. One of her Brahman bull calves, sired by “Snowflake,” helped take her to the American Brahman Breeders Association Register of Renown.

“Another of 286’s Brahman bull calves won the All American as a 2-yearold,” reflects Barthle. “This didn’t go over too well with our friends from Texas, and Louisiana, because a Brahman bull from Florida, just wasn’t supposed to do this,” he adds with a smile. As a coming 16-year-old the Brahman Cow, $BB Empress Berch 286, still resides at Barthle Brothers Ranch in Florida, and is due to calve in January 2011 to a son of MDS Doc’s Pride 196.

Larry Barthle reminisces that one can’t describe 87/4 or 286 without mentioning their great Brahman sire, MDS Berch Manso 155, a 1988 calf. Barthle elaborates, “We needed more size in our cattle in the late 1980s so we purchased 155 from Marcus Shackelford, another Florida Brahman Breeder in the spring of 1989.” Berch earned the title of Premier Brahman Show Bull in Florida in 1991  and was the only Brahman bull east of the Mississippi to beat the International Brahman Champion Bull, Bateman’s 3B Mr. Suva 239, in the show ring. Today, MDS Berch Manso 155 is still a Brahman trait leader for milk EPD in the ABBA sire summary.

“Great Brahman females come from good Brahman cow lines, and both of these Brahman cows are great examples of that,” Barthle summarizes. It is interesting to note that both Barthle-bred Brahman cows on the list achieved Register of Renown status having never been flushed.

To read more about the 30 American Brahmans Bulls and Cows achieving the elite status of Vanguard, please click here to see the artcle as seen in The Brahman Review.